Once Upon a Time...Beirut by Bus

﻿I grew up in Beirut, witnessing its unique chaos, traffic, noises, cars smoke, Mercedes-Benz W114/115 "atech" and W123 "laff" honking all around looking for passengers...etc. I grew up without noticing that my city had almost no public transport...oh with the exception of these old always empty white and blue Berliet or Karossa buses blocking the roads, stopping everywhere, desperately competing with privately owned, newer and smaller Brazilian Mercedes-Benz buses. I admit I was never able to draw their pattern or to discover their route...

I grew up listening to my dad's stories on how he used to jump of the Tramway traveling from the old downtown to Bliss street...and on how in 1964, the Tramway service was discontinued, replaced by buses commonly called "Jahech El Dawleh" (the State's Mule).
﻿﻿
﻿I never had the curiosity to ask about these buses, their operating system, their routes...etc. No one seemed to have stories to tell, no one seemed to have any related memories except that they were used as streets barricades in the 1975-1976 phase of the civil war.

Time elapsed, downtown Beirut was destroyed then rebuilt in an awkward manner and I started looking for old pictures desperately trying to live and feel the long-gone spirit of the city.
In the many pictures I found, in addition to my favorite Mercedes-Benz 180/190 ponton, there was always beautiful off-white and red buses’ traveling on the main axes of the city.

What was the brand of these buses? What were their characteristics? What was their route? Were they clean? Were they reliable? Etc. All these questions had no answers…

My primary search led to the following results: The buses were French made Saviem-Chausson, a brand I never heard of before! The Saviem-Chausson buses were the fruit of the merger between two French companies obviously Saviem (Société Anonyme de Véhicules Industriels et d'Equipements Mécaniques) and Chausson Cars (a French company manufacturing utility vehicles since 1903). The Lebanese government and in an attempt to ameliorate the public transportation and decrease traffic jams in the city ordered 150 new Saviem-Chausson buses that would replace the already old tramway. These buses were the SC-3 model, the topnotch of the bus' industry back then.

Whether the bus system was efficient or not was the second question that came to my mind! Up till now, I am still not able to gather the needed information. Kheireddine El Ahdab, a friend living in Montreal and deeply interested in all the detailed aspects of daily life in the old Beirut described the bus service as inefficient, always late due to traffic jams, not having specified stops and generally lacking the required cleanliness. On the other hand, my aunt Annette described the bus service as efficient, clean and on time. She frequently used to take it from the National Museum Street to Koraytem.

With the beginning of the 1975 civil war, the heart of Beirut was destroyed, the State paralyzed and the links between Lebanese cut. Whether these links were social, emotional or physical didn't matter; the war was there to cut them… The bus system as a physical link stopped, the Saviem-Chausson were mostly destroyed and used as street barricades; an ironical fate for a vehicle destined to solely connect the various parts of the city.

﻿The war ended in 1990, Lebanese were told that they should re-connect together, without having the opportunity to discuss the past, why they fought and killed each others, why they destroyed their country…etc. Everything suddenly stopped, a page was turned and a “wanna be new starts” emerged… Quickly, the physical scars of the war were erased and downtown Beirut was transformed into a huge empty plot of land awaiting new constructions…and new “illegitimate” owners. No true efforts were done to heal the emotional wounds that the war left; no small actions were taken to re-connect people together. The once “big heart” that gathered and mixed all Lebanese together became a giant private property unable to tolerate one single bus stop where ordinary men and women could wait, discuss the weather…etc. before a certain “ja7ech el dawleh”, maybe the grandson of the famous “Saviem-Chausson”, would arrive and take them home, to loved ones, to work…etc.
﻿ ﻿﻿﻿﻿﻿﻿﻿﻿﻿﻿﻿﻿﻿﻿﻿﻿﻿﻿﻿﻿﻿﻿﻿

﻿﻿﻿﻿﻿Few days ago I passed by an old bus “sanctuary” on the “Corniche du Fleuve”. Some buses are still there; among them this Saviem-Chausson bearing deep marks of the war…I bet they mirror those engraved in people’s hearts.
Posted by Classic Cars Lifestyle at 12:39 AM No comments:

Keeping a classic car in perfect shape is on its own a demanding task especially if its owner is kind of perfectionist. For me, the cleanliness, shining and immaculate functioning of my Mercedes-Benz 180b is subject to no jeopardizing under any circumstances; I always look for original parts, trust two extremely well experienced mechanics and use the best, yes truly the best, paint caring products. 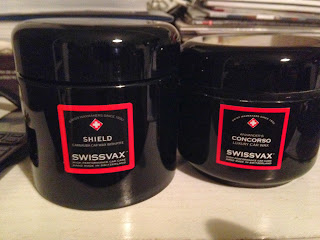 My car’s exterior color is the DB040 Black which on its own is one of the most difficult colors to take care of, hence the need to use the best products available on the market arises. After trying many brands I discovered Swissvax: a bespoke handmade series of waxes that vary in carnauba wax concentration and of course price. Using Swissvax on my car made me discover a new perception of “smoothness and shining”. In fact, I opted for the 2nd best product which is the Swissvax Concorso. The Concorso has a 52% concentration of natural carnauba wax along with many vegetable/ natural oils and aromas and constitute the best quality to price ratio in my opinion. 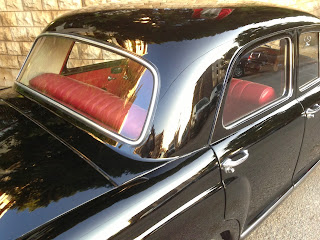 To keep my Mercedes-Benz’s paint in immaculate condition, I wax my car every 3 to 4 months using the non-abrasive Swissvax cleaner fluid and the famous Swissvax Concorso. The key to get the best result is the patience and love one puts in every polishing and buffing stroke! As a start, I clean my car from the garage’s dust and apply the cleaner fluid. Once done I wipe it out and buff it with the special Swissvax microfiber cloth. Afterwards, I apply the wax by hand and let it dry for few minutes before buffing it again. 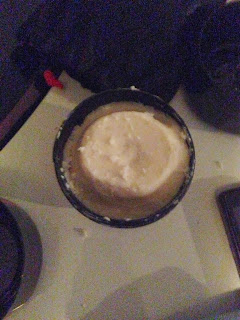 The result is generally immaculate, making me forget the fatigue and stand speechless with amazement in front of my shining Mercedes-Benz. Time has come for waxing! I will try mixing two waxes together; the Swissvax Concorso and the Swissvax Shield - a new blend that is able to fight nature's harshest conditions - hoping to get an even better result…stay tuned for new pictures…
Posted by Classic Cars Lifestyle at 2:47 PM No comments: