To Kill Or Not To Kill 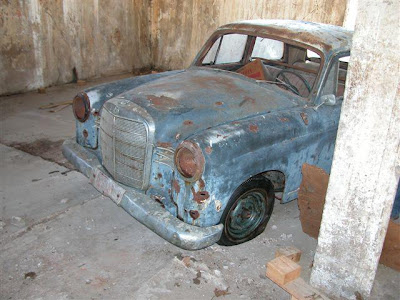 Later on, in 2010, I had the chance to take a closer look at the car…Without any doubts; it’s an interesting ponton from many perspectives:
First, it has the unusual clear blue (DB 356, 335, 353 or 334) color; a rare color for pontons imported to Lebanon if one looks at the available colored old pictures of Beirut. Second, it has never been repaired from rust and thus huge holes exist in its under-carriage. Third it has an extremely rare 45 tours Philips LP player still installed in it. Fourth, it has the gray fabric (cloth) interior which I’ve seen on only one ponton (Farouk El Khalil’s 190b) in Lebanon. Fifth it has 2 front seats (transformed into a bench seat by the former taxi driver) and not a bench seat like most of the pontons intended to be used as cabs. 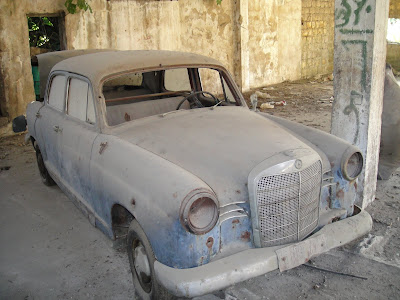 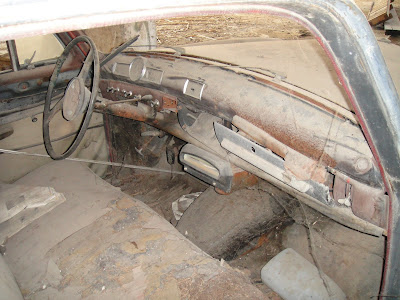 Few weeks ago, Elie found himself obliged to empty the space where this ponton was parked! He therefore asked me to take it and dismantle it in order to use its parts for his and my ponton should the need arise! Automatically, and with the help of Elie’s brother, we moved the car to my mechanic and the dismantling process started. 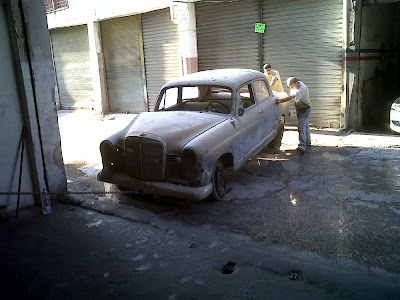 Then, my passion for classic cars along with the challenge of restoring it came up; questions started passing through my mind; should I save this car? Is it worth saving? What if it had a special history? Is it logical to own two “identical” classic cars?
From a pure financial point of view, I would say no out loud! It is not worth saving! But when it comes to my passion for classic cars, and to my love of challenges, I would stop and think again! Why not follow a scientific approach in saving it? I.e. why not dismantle it properly, store parts along with tags (specify to where each part belongs) and keep the cleaned; yes extremely well cleaned; body in my garage until times comes up for its restoration?
How big would the accomplishment be if the car hits the roads again after 30 years of “death”?
Restoring this car is in fact rebuilding it from crap! People and societies according to Naomi Klein in her book “The Shock Doctrine” love to re-build from crap! I love, to re-create what time has changed or destroyed… It is a challenge from many perspectives; I’ve always owned a ponton, my ponton that you all know, owning a similar one for most of the people, but a very different one for me is on its own the challenge…
Up till now, I still didn’t take my final decision…I am waiting to recieve the data card of the car; I want to learn more about it…The coming few days will be crucial…