Being a founding member of IPOG (International Pontons Owners Group), and an active daily visitor of mbzponton.org, I always enjoyed reading the stories of Hartwig Mueller, a retired German Mercedes-Benz Salesman.

Hartwig described in the Ponton Page as well as in his now gone website the daily life back in the late 50s and early 60s when pontons, especially 180 and 190 were brand new, top notch cars. He sold many Mercedes-Benz to US soldiers stationed in Germany and to other people who opted for the Mercedes-Benz quality and simple yet elegant design.


Hartwig passed away on the 13th of November 2013. I regret not having the opportunity to meet him in person and I regret not being able to save his personal website that included a genuine description he wrote about the feel on board of a brand new ponton.

Hartwig, may you rest in peace, your stories have inspired me and have helped me associate my 180b with its original context.

Posted by Classic Cars Lifestyle at 1:14 PM No comments:

"The Imagination of a Generation"

It is always fulfilling to read positive comments about my favorite car the Mercedes-Benz 180/ 190 (W120/ 121).
While surfing the net, I came through the article below; a test drive performed by Paul Stassino from Classic Cars Magazine in Australia on a 1959 Mercedes-Benz 190b. Paul's description was so accurate that I felt I wrote the article by myself.
Indeed, "The 190b Ponton (or 180b in my case) captured the imagination of a generation, and helped cement Mercedes-Benz's commitment to excellence." 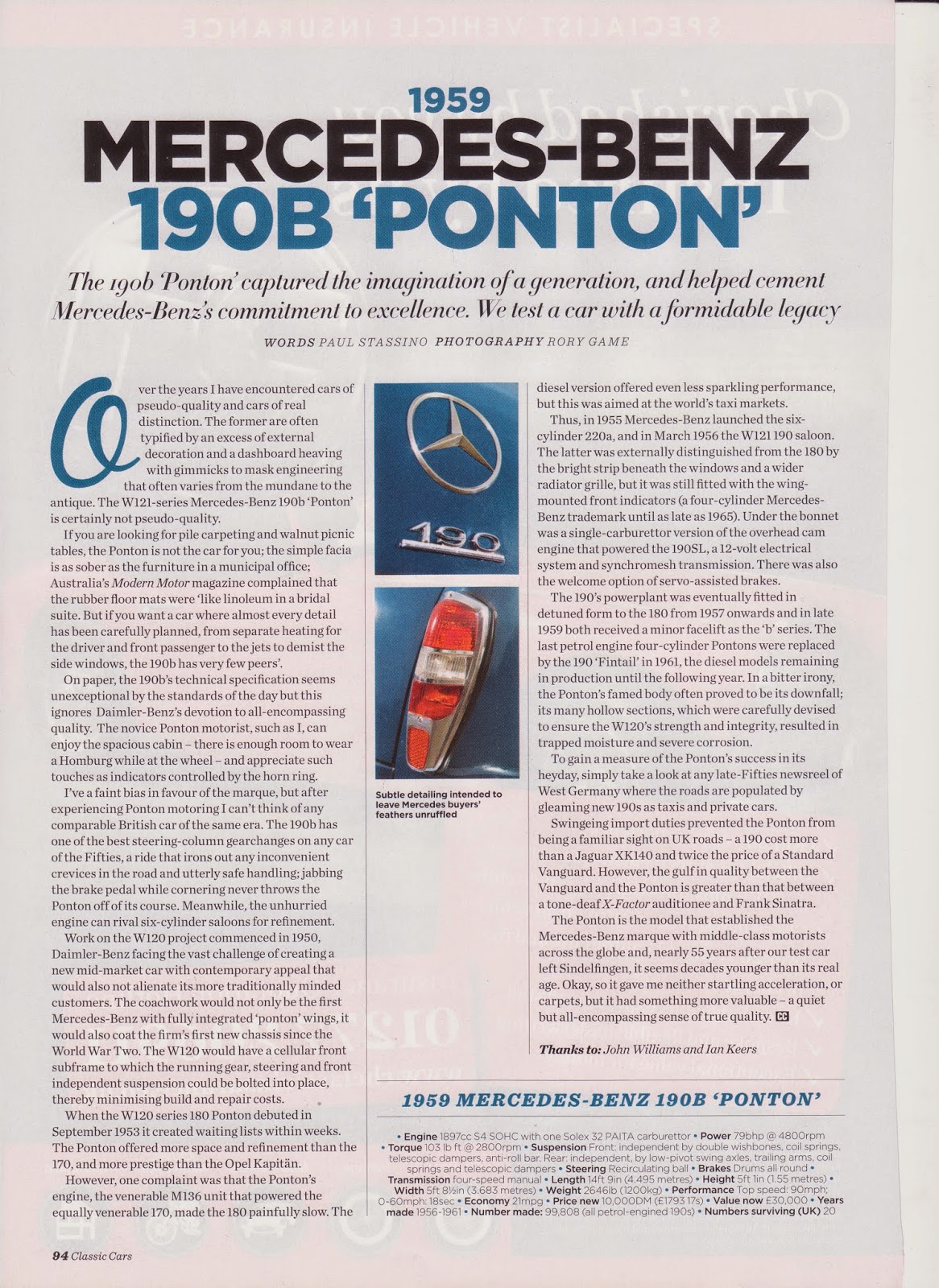 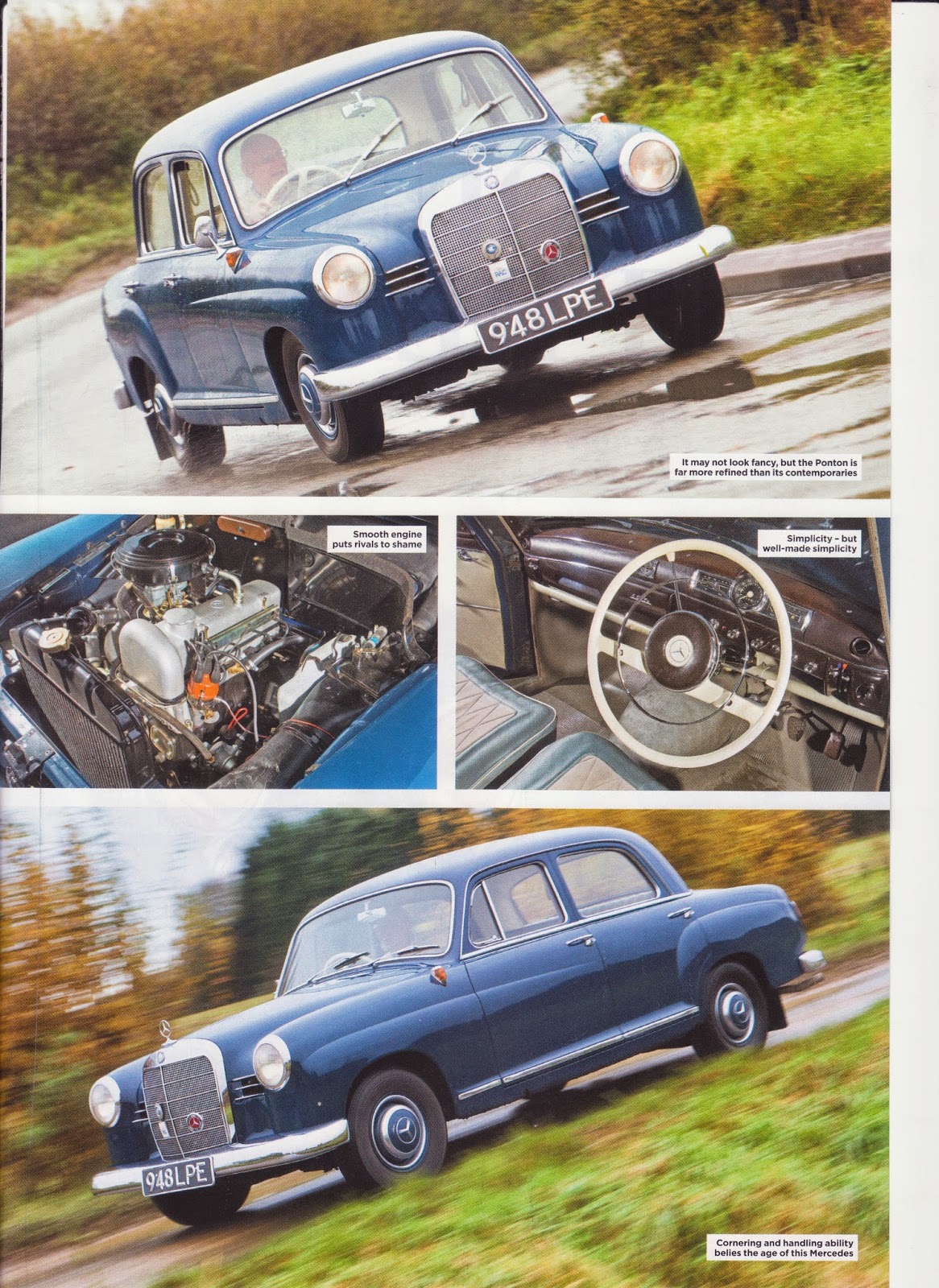 Posted by Classic Cars Lifestyle at 4:45 PM No comments:

Back in 2010, the engine of my 180b (its original engine) started burning oil excessively leaving behind the car a blue/whitish cloud of smoke. Back then, I had a rebuilt 180b bloc that I have kept for years. I didn't know exactly how it was rebuilt but I knew it was ready to be installed. Quickly, I took out the original engine and replaced it with the rebuilt bloc keeping in the back of my mind the idea that this replacement is temporary until I find the right time to rebuild the original one. After Christmas and New Year vacation, and with 2014 announcing major changes in my life, I decided to take the opportunity and rebuild the original engine.

I faced the dilemma of which mechanic to choose for the job. It was either Bechara Ghsoub or Abdo El-Hage. Both are experienced mechanics who have more than 50 years of experience in Mercedes-Benz cars. Finally, I decided to opt for Abdo El Hage for mainly his free time (he is retired but has kept his garage), for his continuous enthusiasm and good speed of work.

The original engine did not need boring; the pistons (standard size) were fine and the cylinder walls too. Of course new rings and polishing were a must. Looking at the crankshaft, we noticed that it needed boring and that it was already bored 4 times! It hence needed replacement! Among the many parts I had, there was a crankshaft that was only bored two times! Perfect match! The head needed new valves, guides and seals, a few hours job with the availability of the parts. Finally, I had a completely rebuilt engine ready to be installed.

The installation process took few hours, the "new" engine quickly took its original place. Abdo, with his usual enthusiasm, and after saying few prayers, asked me to jump behind the wheel and start the car. Three cranks were enough to let the engine start! I was amazed by how smooth it appeared despite everything being new and hence still rough.
I took the car for its first ride. Nothing seemed unusual except its high idle which was left on purpose to smoother the engine. I drove around 100km, from Beirut to Batroun and back. I was happy no overheating was signaled and the oil pressure remained straight at its max.

When I finally arrived home, I noticed some oil dripping from the front crank seal; a deception after all the work performed. The seal I had installed was a NOS piece: I learned the hard way to never install NOS items when it comes to seals, joints and rubber pieces as these items tend to loose their elasticity and sealing properties with time. I ended up buying a new one from the Mercedes-Benz Classic Center.

With the new front seal installed, I started driving and enjoying more and more my car. The break in period has been completed now: An oil and filter change, greasing and an engine bay wash is all what is required.
The next project will involve the rebuilding of the heating system; I admit it is a big challenge.

Posted by Classic Cars Lifestyle at 2:08 PM No comments: