Postcards From Here and There...

I’ve been collecting postcards from the 1960s and 1970s for a while! Most of them, of course, show cars (pontons, Citroens…etc) while others show the daily life in some cities. 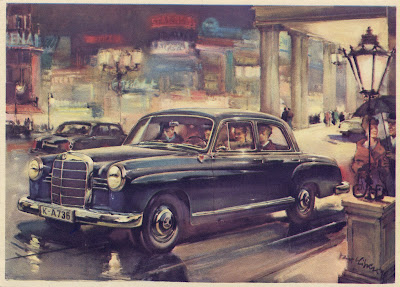 First, this painting reproduced on a postcard shows two couples in a Mercedes-Benz 190b leaving a theater or a music hall on a rainy night... 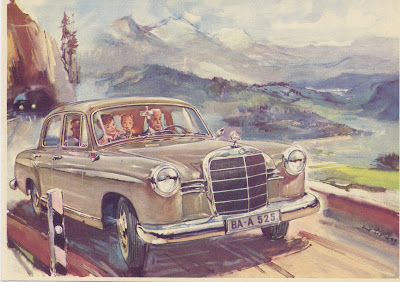 This other painting reproduced on a postcard too shows two couples in a Mercedes-Benz 180b enjoying a sunny day on a mountain road...

An entire industry of commercial artists flourished during the 1950's and 1960's when this type of postcards, toys boxes...etc. was trendy. 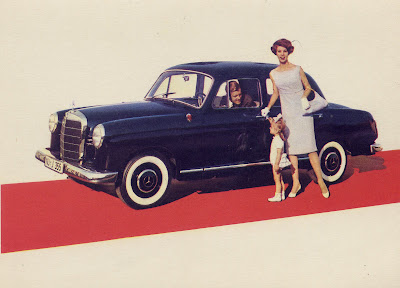 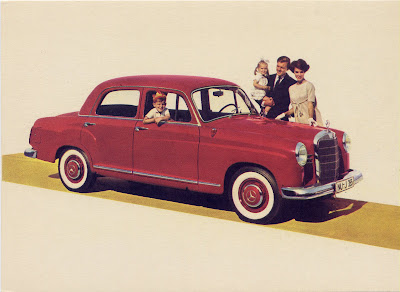 These two postcards promote the Mercedes-Benz 180b/190b Models as economic family cars for the babyboomers. They were published by Mercedes-Benz in the early 1960's. 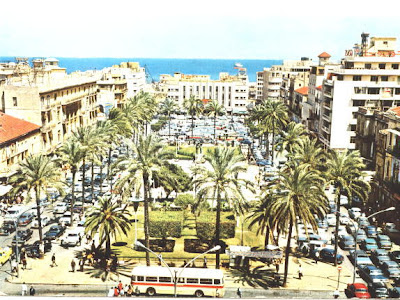 An old postcard showing the "Place des Martyrs" in downtown Beirut. The Martyrs Square was one of the most crowded areas of Beirut prior to the 1975-1990 civil war.
It was the hub of its economic activity where, consequently, all taxis (Pontons, Fintails...etc.) used to gather and go to all the regions of Lebanon.
The yellow and red bus in this photograph is presumed to be a french made Saviem-Chausson. The bus system lasted only from 1964 till 1975. 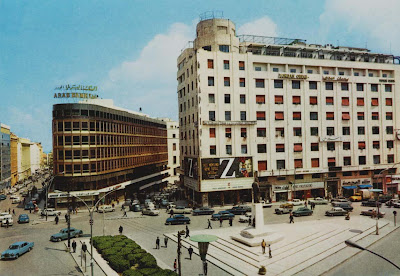 This postcard circa 1969 shows Riad El Solh Square in the heart of Beirut. The two buildings in the picture are still in place. The Square itself changed a lot though! The traffic directions, and of course the type of cars are not the same anymore! 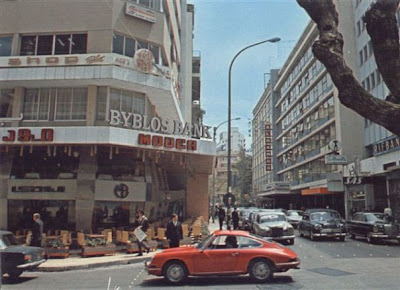 This postcard is from the late 1960s or early 1970s. Hamra street is still almost the same, although the old and prestigious "Modca Cafe" closed its doors! One can notice two Mercedes-Benz 180b/190b (pontons), a Mercedes- Benz 220SE Fintail, and a beautiful Porsche! 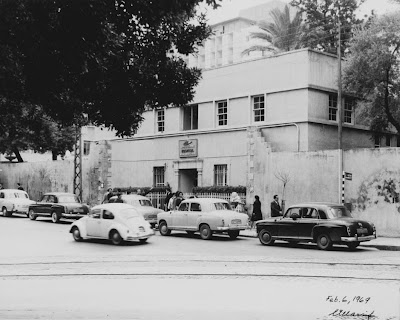 This photograph of five Mercedes-Benz Ponton taxis hangs on the wall of the American University of Beirut Hospital. It was taken on February 6, 1969 by a photographer from the Nassif family.

The environment in the photo has changed since 1969. In place of this old building there is a huge underground garage for the "new" American University Hospital (AUH). If you have a look at the road, you will notice two parallel lines. This was a railway that used to pass by the AUB on Daniel Bliss Street. The train traveled on this and other main streets of Beirut. It was replaced in 1964 by a new bus service which only existed till 1975 because of the civil war.
On the right, next to the first black Ponton, you see a sign painted black and white. These signs were used to show designated areas where taxis could stop. 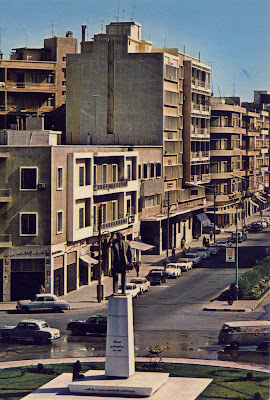 This is the Abdel Hamid Karami Square in Tripoli- Lebanon circa 1969. The square has changed a lot since then. Karami Statue does not exist anymore.
Note the 3 pontons, the VW Camper and the VW Beetle. 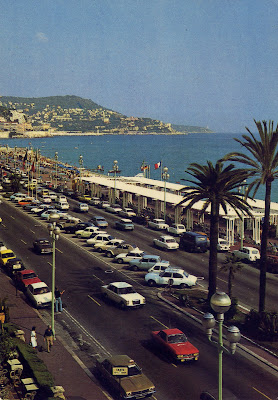 "La Promenade des Anglais" and "Le Mont Boron" in Nice (South of France) appear in this postcard circa 1976. As you can see, a Mercedes-Benz W114/115 follows a beautiful red Alfa Romeo coupe. On the other side of the road, a cute blue with white top Citroen Ami reflects the typical popular cars of that era.
On the parking spot in the middle, a Peugeot 504 and many Citroen 2CV wait clamly for their owners... 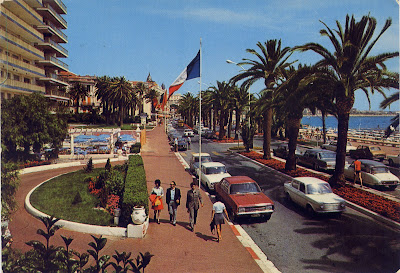 This postcard from Cannes (South of France) shows "La Croisette" in the early 70s. On the right side of the road, a beautiful Citroen DS is parked behind the legendary Mercedes-Benz 600. Also, a red Opel Record is parked on the left side of the road in front of a white Alfa Romeo.
Notice: The buildings on the extreme left reflect the 1950s and 1960s architecture. 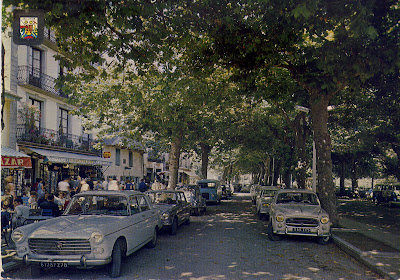 This postcard from Spain, precisely from the region of the "Vall d'Aran", shows some cafes along with two beautiful Peugeot 403 and 404 in the front plan and a Citroen Ami. 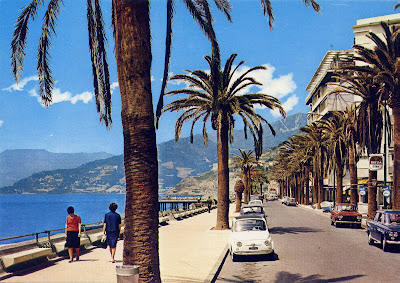 Finally, my favorite postcard from Ventimiglia in the North-West of Italy. Notice the amazing Fiat 500 with the Webasto sliding sunroof and the beautiful walk by the beach.
Posted by Classic Cars Lifestyle at 1:20 PM No comments: 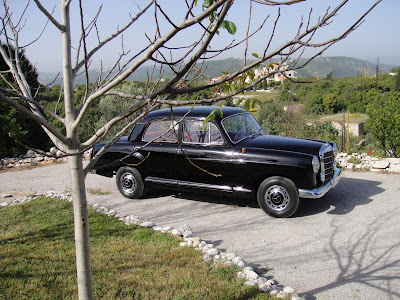 Every New Year, people make resolutions! Some decide to be positive, others decide to lose weight, change jobs, travel…etc. One of my 2011 resolutions is to find all the possible details in relation to the history of my car before its 50th birthday on the 16th of February!
The information I have till now is the following:
 The car rolled out of the production line on the 16th of February 1961
 The car was sold by T.Gargour & Fils (the Mercedes-Benz agent in Lebanon) in 1961 or 1962
 The previous owner of the car is from the Soueid family from Btaaboura – Koura 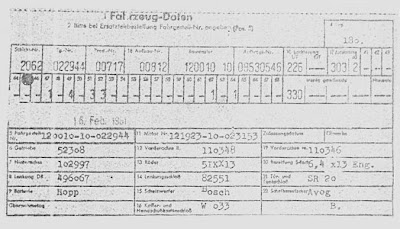 I will start by contacting T.Gargour & Fils to check if they have any archives pertaining to cars sold in the 1960s, then I will contact the family of the late previous owner to try to know when he bought it, from whom, and for how long he kept it...