A Visit to the Homeland of Pontons


While surfing the net, "ebaying" for ponton parts I allowed myself to save some old pictures proposed for sale on eBay.
What I liked about those pictures, is the fact that they reflect genuinely the daily life in Europe back in the 1960's and early 1970's. 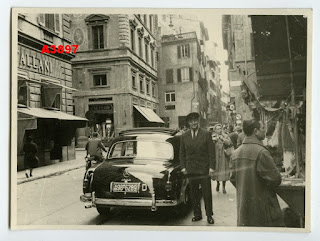 Here above, the legendary taxi driver stands proudly next to his ponton! The Mercedes-Benz pontons remained the taxi drivers' faithful companions for years! 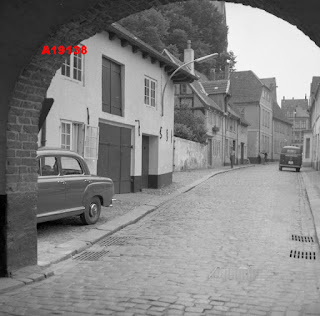 A typical old european country side road. The Ponton is part of the decor. Note the old style street light; this same model was used in the streets of Beirut back in the 1960's. 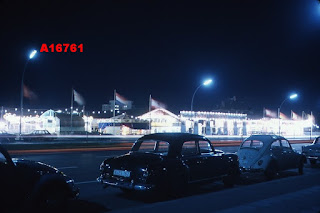 Modernity by the 1960's standards: A 180b parked behind a VW Beetle and what appears to be a gray Fintail in front of a luna park in Berlin. All three cars are legendary. 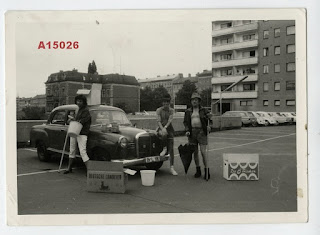 A picture from the late 1960s or early 1970s. Youngsters selling dairy german products. Note the relatively tired 190b with the "Germany" badge on front grill. The architecture of the building on the right is typical that of the late 1960's early 1970's. 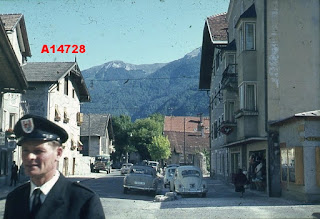 A policeman in a German village. The serenity of the countryside is explicitly shown in this picture. Again, popular cars parked next to each others; a ponton, a beetle and what appears to be a Fiat Cinquecento. 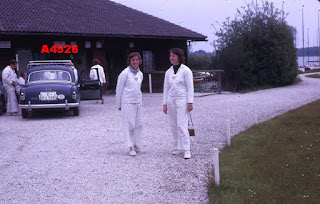 Band members? A folkloric group? The 190 ponton with the remarkable "D" (for Deutshland) metal oval plate, the big square license plate and the roof rack seems to be a reliable and comfortable car for the group. 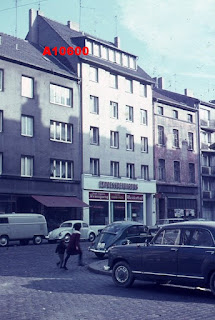 Beetles, VW Samba, an Opel Kapitan station wagon and a 190b. Note the extremely tall antenna! What was the radio this ponton had? A Becker Mexico? LeMans? A Blaupunkt? A Philips? Or perhaps a rare Telefunken? 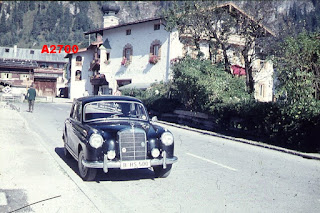 The 220S/SE was the top of the line of the Ponton series. Note the large white wall tires; an option on all the Mercedes-Benz models of the era. 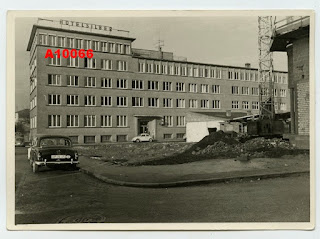 An austere looking hotelsilber (silver hotel) with the typical late 1960s architecture. The 180b or 190b is as usual there... 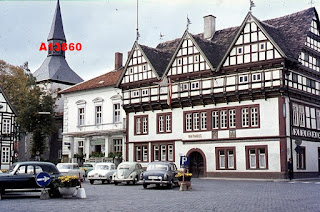 A typical European "Auberge" or small hotel most probably in Germany or Austria. Note the 2 Mercedes-Benz ponton, the VW Beetle and the popular Renault Dauphine. 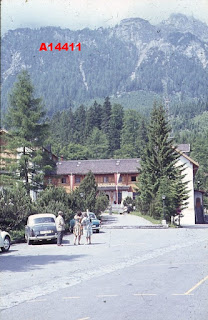 A group of tourists contemplating the mountains. Which mountains are these? The ponton is a rare two tone painted car. An amazing scenery that makes me want to drive my ponton there!
Posted by Classic Cars Lifestyle at 5:03 PM