A No Man's Car

Hit by the female-appeal craze in 1955, Chrysler introduced the Dodge “La Femme”, the first and only American car marketed solely for women. “By Appointment to her Majesty…The American Woman” exclaimed the brochure. Though short lived, the 1955 -56 "La Femme" can’t but be considered a unique car reflecting a prosperous and beautiful era.

In the 1950’s GM (Chrysler’s main competitor) introduced many models of cars having a certain feminine appeal. The Cadillac Eldorado Seville Baroness, Pontiac Pink Parisienne and the Chevrolet Impala Martinique were some of these cars.
Hit by the virus in the spring of 1955, Chrysler introduced the “La Femme” a two doors Dodge Custom Royal Lancer with some additional trim and accessories costing 143.30$ by the 1950s standards. The price of the Custom Royal Lancer was $2,543 back then. 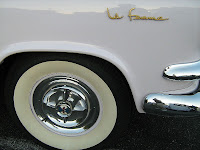 The ultimate touches which personalize “La Femme” are its special feminine accessories. Two compartments located on the backs of the front seats are upholstered in Heather Rose Cord grain. The compartment on the driver's side contains a stylish rain cape, a fisherman's style rain hat and an umbrella which carry out the Jacquard motif. The other compartment holds a stunning shoulder bag in soft rose leather. It is fitted with a lighter, a lipstick and a cigarettes case. 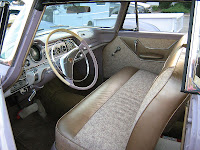 "La Femme" was dropped for the 1957 model year, mostly because of a fairly high price for the options it had and maybe a lack of good promotion by Chrysler.

I tried to browse the internet looking for one for sale but in vain. These cars have become extremely rare. Though the “Custom Royal Lancer” might still be found on eBay (for example), its “La Femme” version has completely disappeared. Some estimates state that only twenty cars survived (one of them is in the displayed pictures).

These cars reflect the role women had in the 1950’s in the US: Back then, most of them had already joined the workforce. "La Femme", with its colors, options and shape, in addition to trying to add a certain feminine aspect to the extremely mannish cars’ environment, came as a scream for women to distinguish themselves from men on this particular side. The Europeans, in my opinion, did not tackle this issue in the same manner. They either introduced extremely small cars (such as the Citroen 2CV, or the Renault Dauphine) and marketed them as cars that would be “preferred” by women or simply pictured a woman driving a Mercedes-Benz 220S with the semi automatic Hydrak Clutch, for instance, implying that this car was easy to drive.

I strongly believe that the cultural and social differences between the US and Europe reflected extremely well on the automobile industry. The designs and the size reflected it most. In this posting a new dimension is observed: The Americans (Chrysler is this case) tried to completely differentiate between cars for women and cars for men. A certain marketing strategy I would say; bad in terms of sales results apparently, but extremely successful in terms of cultural heritage and originality.
Posted by Classic Cars Lifestyle at 3:25 PM